I read all of Simone de Beauvoir's novels and some of her autobiographical writing at a young and impressionable age when sitting in a Paris cafe writing books was my idea of a sensible career path. (Now, of course, after the rather strict lockdowns they had in France, I realise that writing from where I'm sitting right now is much more sensible.)

Seriously, though, having been imprinted on Beauvoir as an intellectual role model, I was thrilled to see she's got a new book out, at the age of 110 plus. I only found out this year, when the English translation was published, but the original came out in 2020.

Les inséparables is a fictionalised account of her childhood friendship with and crush on school friend Elisabeth Lacoin, called Zaza, who died in 1929 aged 21. The account written in 1954 was deemed to be too emotionally sensitive to be published in her lifetime. A more distanced version was include four years later in Mémoires d'une jeune fille rangée.

In a detailed preface to this belated publication, Beauvoir's adopted daughter Sylvie Le Bon de Beauvoir explains the complex relations between the real life story, the short novel, and the memoir, which I found really helpful. It also comes with 18 pages of photos and copies of letters between Simone and Zaza.

I may be biased for imprinting reasons cited above, but I found the novel very moving and relatable (as we've only started saying long after it was written), and I'm very grateful that it came out at last. At 150 pages, the text is much more accessible than the memoir (which I bought 38 years ago but I'm not sure if I actually read it!), and I guess it might help to introduce new generations to the emotional and sensitive side of the great philosopher and feminist. 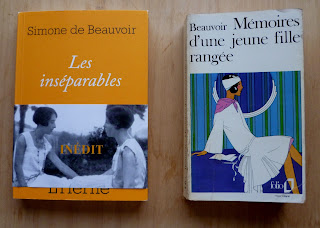 My editions of both books, own photo. I was too impatient to wait for a folio paperback to match my collection of Beauvoir's other works.

PS: My grandmother Ruth, shown here with a friend in her student days, was born the same year as Simone de Beauvoir, which makes the story even more relatable.