a patchwork family in East Prussia

Every picture tells a story, No. 14 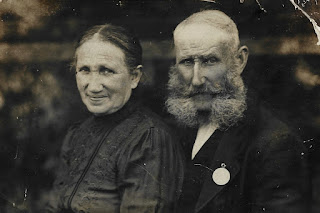 married in 1896, after they were both widowed. Each brought along around five children and then they went on to produce another five, some of whom are in the next picture, which is the one I want to talk about. (Due to the poor quality of the original, it looked horrible in preview so I've moved the couple portrait up to the top to appear in previews instead.)

Their shared batch of children includes the one we're interested in, Luise Auguste (1898-1979), third from right, at the back, who postumously became my grandmother in law. Her parents are at the back too, and who the other ones are is anybody's guess - the one holding a baby could be the oldest daughter from Wilhelmine's first marriage, Marie Wittke, who married a Karl Witt and had her first child in 1915, which is about the time the photo was taken. 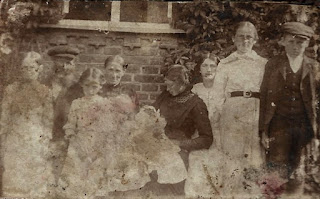 The photo is a tiny print held in a souvenir etui opposite a portrait of one of Franz Faust's sons from the first marriage in uniform. All of which supports a date during World War I. The postal address during the war was Friederikenruh, Post Eiserwagen, Kirchspiel Allenburg, Kreis Wehlau, East Prussia. Friederikenruh was a Rittergut ("landed estate" the internet tells me but I don't know where that leaves the Ritter=knight) with 95 inhabitants. All of whom probably worked for the resident knight in some form. Franz is referred to as a Kämmerer in documents, ie financial administrator. Franz and Wilhelmine's joint son Karl Otto, born 1895, also was a Kämmerer.

Auguste moved to Hamborn in the Ruhr area in 1922, but her parents stayed in East Prussia all their lives. They both died at Groß-Neumühl (Kr.Wehlau), which may be the place mentioned on the photo with the fiddle.

The next family portrait is from 15 years later (1930) and shows Franz and Wilhelmine with the family of Marie and Karl Witt: 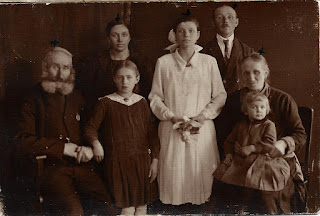 Their ancestry is poorly recorded but interesting. The Faust lineage hails from Lablack, Kr. Labiau, where Faust families are documented since 1619. Domscheit is a Lithuanian name found in East Prussia - a famous carrier is the painter Franz Domscheit who changed his name back to the Lithuanian version Pranas Domšaitis and emigrated to South Africa. The history of the (mostly bilingual) Prussian Lithuanians is a fascinating one.

Their descendants could be just about everywhere - two of Wilhelmine's daughters from her first marriage emigrated to Australia.

Correction: I just realised he went by his second name, Franz. His father was just Karl.