I have very strong feelings on the old town mouse vs country mouse dichotomy,* and I love a bit of urban ecology and evolution, so when I spotted a new paper on town bats and country bats, it was a good enough excuse to revisit this field, which I last covered in 2018. Along with the bats I also covered other recent highlights of urban biology including those dustbin-opening cockatoos in Sydney and the global study of urbanisation in white clover.

Tales from the urban jungle 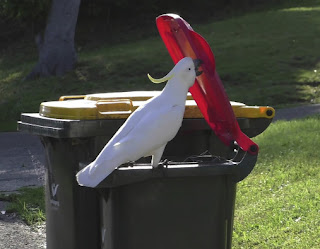 Sydney’s sulphur-crested cockatoos (Cacatua galerita) like to scavenge waste. Some of them have recently learned to open hinged lids of wheelie bins and the knowledge spreads locally by social learning. (Photo: B.C. Klump.)

* Just after I sent off this feature, there was this yougov poll suggesting that a majority (44%:32%, with 24% don't know) of people in the UK believe it is better to bring up kids in the countryside than in towns or cities. Intriguingly, the country-mouse constituency grew with age. Those who still remembered being kids were against, those in the age group of typical young parents were already in favour, and those my generation and older were just going crazy. I by contrast have moved in the opposite direction. I didn't think much about it as a youngster as I was heading to university and city life, but the more life experience I've accrued in cities, including the experience of bringing up my own children in a city, the angrier I get about the many opportunities that I missed growing up in the sticks.