Let's have some migration stories from the folks that had already migrated from East Prussia to the Rhein-Ruhr area in the early 20th century. Some kids of the next generation then moved on to overseas, including Grete Kalippke, a niece of Ernst Leopold the steel worker. Grete's mother, Anna Kosmowsky (Ernst Leopold's sister), married Gustav Kalippke and settled at Mülheim. (Gustav Kalippke was born in Gerdauen, East Prussia, close to where the Kosmowsky migrants came from. As with the Hamborn couple of Auguste Faust and Ernst Leopold Kosmowsky, we aren't sure whether the westwards migration was a joint project or whether upon arrival the associated with fellow East Prussian and thus were likely to marry them too.) They also had two sons who both died in World War II.

In 1948, Grete married a guy called Heinrich Diewert, and the pair of them immediately emigrated to Canada. Actually, there were Diewert people in Canada before that time, such as young Erwin Diewert and his parents, so I am not sure whether Heinrich really emigrated or just returned home? I am having trouble finding any Diewert people in Germany. It's all a bit weird, and multiple traces lead to Ukraine.

Anyhow, here she is at Würzburg (not sure whether anybody in her family had any connection to the city or whether they were just passing through as tourists, in any case it is a very touristy thing to have your photo taken at this precise spot on the old bridge, with the Festung in the background!): 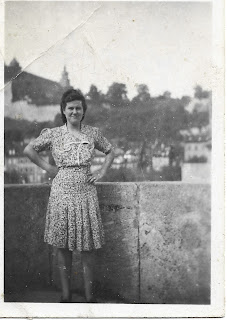 then at Bremen, with her new husband, en route to the New World: 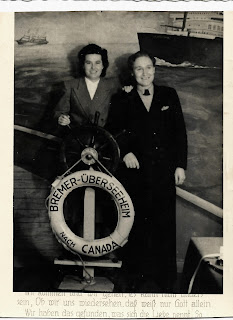 and at a later point I assume she took up flying to visit the relatives back home, because here she is at Düsseldorf airport with a plane to catch: 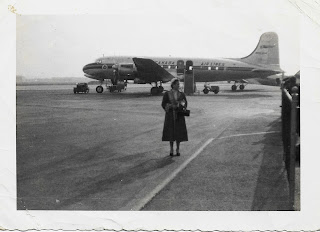 It just occurred to me, as she died aged 40, that the appalling lack of air traffic safety in the 1960s may have been why, so I checked, and no it wasn't.