My #lostcities series on this blog has influenced my thinking about various things and indeed my travel plans, as I have (re)visited a few of the cities where my ancestors used to live in the last two years and really enjoyed discovering those I didn't know. I'm only missing Königsberg now, but I'm getting the impression that this city doesn't exist any more in any meaningful way, and given the current situation, I have no plans to travel to Kaliningrad.

I have compiled a B-list however of cities that are also relevant in this context, even if the case may be less clear and/or information harder to find. For instance, some of my direct ancestors lived in Breslau (today's Wrocław) for something like 40 years in the 19th century, but I can't pin down start and end dates, nor an address where they lived or worked, so it's all a bit hazy and virtually impossible to get a sense of place to attach to their lives. Information is slightly better for Krefeld, but I don't have a start date either. In any case, I'll see what I can do about these and a few others, so watch out for #lostcities season 2 at some point.

In the meantime, let's reshuffle the 10 cities of the first series to do some rankings.

Have a postcard from Minden, winner of the longevity ranking: 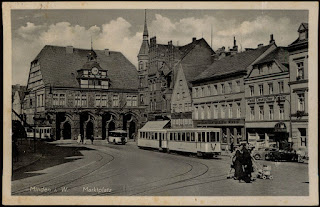 Second, cities ranked by most recent stay of direct ancestors