could be a cousin

For the second season I may widen the scope a little bit, also allowing photos from the 1960s and early 70s, let's say at least 50 years old, ie my parents' generation can appear as adults, and my generation as children. Sticking with b/w though as I hate the early colour photography.

First up, though, some older photos which get priority because they throw up questions that we would like answered. Starting with a mysterious suspected cousin of Hedwig the milk maid: 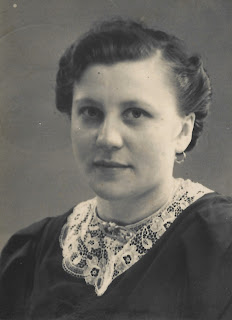 The writing on the back, from the subject of the portrait says:

(NB Berlin O17 is now known as Friedrichshain, northeast of Kreuzberg. Although Google maps doesn't find this Frankfurterstraße, my 100-year-old travel guide Berlin tells me that it was a continuation of the Frankfurter Allee, which still exists today. It runs in the direction of Frankfurt/Oder rather than the more distant Frankfurt/Main.)

So we learn that Lotti (presumably Charlotte on her birth certificate?) shares the surname of Hedwig and her father the baker Wilhelm Geppert, and that she sends or gives them a photo from her address in Berlin, to remember her by. The date is a few months before Hedwig's wedding - I checked because I wondered if Lotti visited the relatives on that occasion. (Sadly we don't have a group photo of the guests at this wedding.)

My guess would be that the baker must have had a brother whose daughter ended up in Berlin for reasons unknown. The only trouble is we don't know of any siblings of either of Hedwig's parents, although at the time it would have been very weird if she didn't have a dozen aunts and uncles. So we don't know any cousins and we haven't heard of anybody moving to Berlin either. This is the first clue we have of any such relations, so if anybody knows more about Lotti we would be very grateful for any hint. There are Geppert people in Berlin listed on GedBase, including some hailing from Silesia, but there's no obvious answer to this riddle. Part of the problem is that Geppert / Göppert, being the Silesian version of the ancient first name Gebhardt, was a fairly common name in Silesia.

Just to throw a few more names into the mix, if Lotti is Hedwig's first cousin, the shared grandparents are Joseph Göppert, Riemermeister at Reichenstein (Riemer being an extinct type of artisan making all kinds of belts, straps etc from leather), and Ottilie Büttner (or Scheidthauer, not sure why her maiden name changes between different documents relating to her son). Both died before their son Wilhelm the baker got married in October 1912. There is no further information about either of them.

Stop Press, after writing this entry I discovered a postcard from WW I proving that Wilhelm Geppert the baker had a brother called Alfred. At least in April 1917 he still had. As Alfred has never been heard of again, I would suspect he may not have returned. May launch a search call later in the series.

UPDATE 8.9.2022. Just discovered a list of addresses from WW2, including a different address, also in Berlin, for Lotti. Now she is in Dahlem, I'm struggling to decipher the name of the street but it could be Bitterstraße (which at least today exists in Dahlem) 21, first floor. Bitterstraße 21, if correct, has the advantage of being a listed monument, as an example of a 1920s combined office and residential building designed by Otto Rudolf Salvisberg, so you can see a picture and read all about it here (in German). A modern photo is here. Oh, and as the page doesn't mention a change of address, I assume it was already called Bitterstraße 21 when it was built, so this is reassuring.