The picture of Lotti, who may or may not be a cousin of Hedwig Geppert, made me realise we have no info on any cousins of either Hedwig or her husband Paul Gellrich jr. Judging by contemporaries for whom I have the complete data, I would expect each of them to have between 10 and 20 cousins. I trust that quite a few of Paul Gellrich's cousins appear in these photos of two weddings involving his extended family, first that of his sister Maria Gellrich: 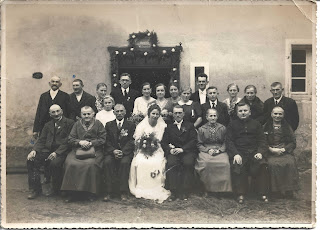 (high resolution scan, so you can zoom in and look at individual faces more closely)

which took place on 28.10.1939 at Protzan, Silesia (note that Paul Gellrich wasn't there, presumably on war duty). Maria's mother, Hedwig Scholz, sits on the other side of the groom and looks as grumpy as she does in all photos we have of her. Also in the front row, first from left we have her father, Paul Gellrich sr. and in the back row second from left her brother Josef. I believe the young woman standing directly behind the groom is Maria's younger sister Hedwig (not to be confused with her mother or her soon to be sister-in-law, both of whom were also called Hedwig Gellrich after getting married).

One of the guests at this wedding, back row, in front of the narrow window, is getting married in the second picture, which may actually date from a bit earlier, as a wider range of males including a few of service age are present: 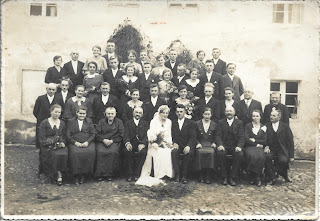 Sadly we don't know bride, groom, date or location of this wedding but we recognise Paul Gellrich jr, second row from top, second from right. The young woman in third row directly behind the bride looks like his sister Hedwig Gellrich to me, but their mother isn't there. We also recognise a couple of other guests from the first picture, including the older woman and man left from the bride, but don't know anybody else's name.

Note that the characteristic combination of head shape and protruding ears of the groom are also in evidence in half a dozen of the other males, so I am tempted to speculate that the big-eared clan could be the relatives of Hedwig Scholz (I'm assuming the women successfully disguise this phenotype with their hairstyles, also, we rarely see Hedwig Scholz without a hat). From legal documents relating to an inheritance dispute, we know that she had two sisters and one brother, then all resident at Olbersdorf (later became Groß-Olbersdorf), Kreis Frankenstein, but we don't know anything about their offspring. At the time of the legal dispute (1907) these siblings were young adults, Anna Scholz had married a Mr Martin, while no spouses are mentioned for Maria and Josef Scholz. Between them they could have produced any number of nieces and nephews for Hedwig Scholz, and thus cousins for Paul Gellrich.

The legal document also names four cousins of Hedwig Scholz on her father's side. Her aunt Theresia Scholz married somebody called Köhler and had four daughters, Auguste, Anna (married Delock), Johanna and Hedwig Köhler. The deceased was also an aunt of Hedwig's but didn't have any children

As always, all hints appreciated.

I'll hotlink a map of the relevant county, Kreis Frankenstein here, where all these things happened:

The Gellrich family owned a farm (inherited by Hedwig nee Scholz) at Gross-Olbersdorf, just northwest of the county capital Frankenstein. Paul Gellrich senior hailed from Tarnau, a bit to the south. Protzan, where Maria Gellrich's wedding took place, is just north of Frankenstein.