Like Grete who emigrated to Canada in 1948, our next migrants also descend from the families that moved from East Prussia to the Rhineland to find work there. We're revisiting the East Prussian patchwork family now, and talking about descendants of patchwork mum Wilhelmine Justine Domscheit (1863-1942) from her first marriage to somebody called Wittke who must have died before 1896. Confusingly, her daughter Anna married Karl Witt (whom we have seen in the WW1 postcard), and I have a feeling that some of the notes and indications on photos we have may have mixed up the Wittkes and the Witts.

In any case, two children or grandchildren of Wilhelmine Domscheit, called Erna and Hilde Witt(ke) emigrated to Australia and disappeared from the radar. On this photo, taken in 1955 on the occasion of a baptism in the family of Grete Witt(ke) who must have been a granddaughter of Wilhelmine Domscheit and married Heinz Schönbeck (they appear on the right at the back), Australian migrant Hilde is at the front in the middle, also looking like she must be a granddaughter of patchwork mum: 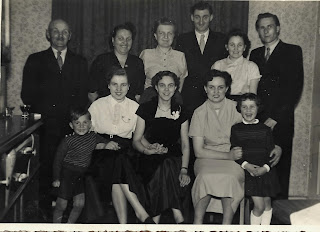 Karl Witt appears at the back, left, and next to him is "Lina Witt" according to the notes on the back of the photo. This doesn't match my records, I'm guessing it could be either his sister-in-law Lina Wittke, or his wife, Anna Witt, nee Wittke. Very confusing business, any hints appreciated.