Back in July I did learn about half of the first bourree in Eb major, so that went to plan, but then August through to October were kind of busy and I've just about managed to consolidate the movements I can still remember. Just too much going on in the world.

Now I'm vaguely hopeful I can carry on memorising the rest of the bourree this month, might have to go into hibernation and cancel other activities, but fingers crossed.

Of the movements I had once learned, I have almost recovered the minuets 2.5, to add to the list of 1.3-1.6 and 3.5, so that will be six movements in an almost presentable shape which I keep on my revision list. 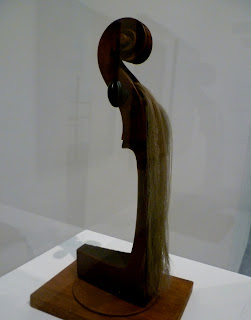 Emak Bakia, a piece of cello-inspired art by Man Ray which I saw at the Tate Modern in October, more info here.