Back in February my tumblr account was terminated and I couldn't be bothered to start over again, but with all the things happening at twitter now, I was intrigued to hear on Wednesday that tumblr has - after nearly four years - given up on banning female presenting nipples. I thought that sounded like a step in the right direction, so I launched a new attempt, this time as prose2passion.

I'm also using Mastodon more regularly in an attempt to be better connected there when twitter collapses. It's amazing how much more activity I've seen on Mastodon since Musk carried that sink into twitter HQ. Still haven't tried pinterest.

I even tried to log into my old MySpace account but failed (even though I am quite sure I have the correct login details). Maybe they block logins that haven't been used for ten years. 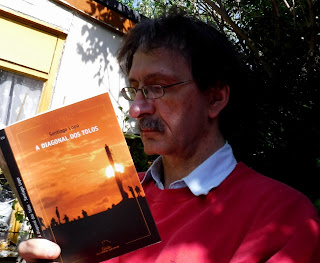 my new profile pic on tumblr (dates from 2019 though). Am likely to keep the bookish theme there, so this seemed to fit. The book is A diagonal dos tolos by Santiago Lopo.