Several of the numerous children of the East Prussian patchwork family moved to West Germany in the 1920s, some possibly later. Of the four children the couple had together (on top of the ten from their previous marriages), the oldest, Karl Faust, died in 1945. His three sisters are shown here in a 1955 meetup in Lippstadt, first without: 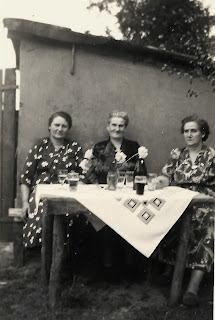 and then with the surviving husbands: 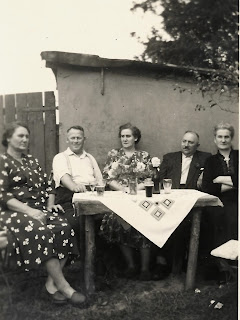 At the top that's from left to right Luise (married name Hießke), Auguste (Kosmowsky) and Hanna (Krieger). Auguste's husband Ernst Leopold the steel worker had died in 1945. We don't know much about the Hießke family living in Lippstadt, as contact with them wasn't as close as between the other two families.

Update 26.11.2022 Expanded the title as I just realised I used three sisters before, in season 1.