When Hedwig had her photo taken with all those milking accessories, a horse crashed the photoshoot. Here she comes again, a bit later in life, with more unexplained horses.

This photo where she seems to be enjoying being the only woman in the presence of a bunch of young men dressed up for riding, hunting, or I don't know what, was taken at the Hammoser farm in Brase, now part of Neustadt am Rübenberge, Lower Saxony, where Hedwig and part of her family arrived after being evicted from Silesia. 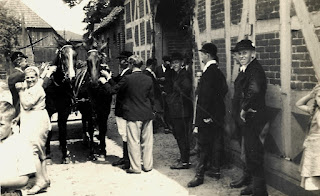 By contrast, the location for this one is far from clear, could be Brase as well, but could still be Silesia. The guy driving the carriage is allegedly Hedwig's brother in law Max Fuss, who wouldn't have been in Brase, normally. 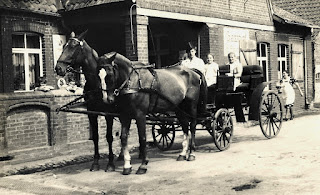 We've failed to track a pub of a name beginning with "B. Bein" (as per the large sign behind Hedwig) to Brase too. So, it's all slightly confusing.