This photo from Silesia is a bit of a guessing game, but I think we have Gellrich family on the left, and Geppert family on the right, with their shared grandchild and two uncertain great-grandmothers? In which case we're looking at the 1940s. 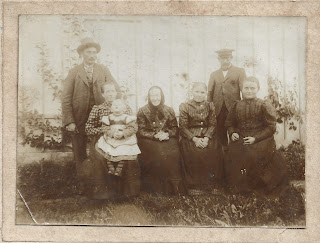 (This is a high res scan in case anybody wants to zoom in and try to ID people.)

Which would mean that, identifying the grown-ups by their birth names as usual, we would have from left to right, Paul Gellrich sen., Hedwig Scholz, then the old lady could be the mother of either, i.e. Mathilde Metzner or Anna Kleße respectively (although I tend to prefer the latter interpretation, as I think she looks a bit more like Hedwig Scholz). The Gellrichs lived at Groß-Olbersdorf, Kreis Frankenstein, and we last saw them at the wedding of their daughter Maria.

On the right we have Martha Stephan and Wilhelm Geppert, the baker based at Dörndorf, Kreis Frankenstein. Of the Geppert family, three great-grandparents hailing from Reichenstein and Kamitz are known to have died earlier, with the only potential survivor being his mother, who was called Ottilie and was born either Scheidthauer or Büttner (conflicting info in different documents relating to her son.) Of the great-grandparents' generation we have no specific dates, places or other photos to compare this to, so very big question marks over these two.