So the last time I wrote a blog entry about twitter was on the occasion of my 10th anniversary on the site, in July 2019. Sadly it now looks as though the blue bird is being strangled, plucked and roasted and may not be around for the 14th anniversary of my signing up.

Luckily I already had a mastodon account set up back in 2018 (then as a tumblr alternative), so now I only had the task of transferring my twitter network to the mastodon address, and that has worked surprisingly well. Last Monday I ran one of the relevant programs on my twitter contacts and discovered more than 150 people to follow. Many followed back fairly swiftly - it's so nice to be in a place where people are still curious about each other. Feels a lot like early days twitter, actually, when people were flooding in from the ruins of MySpace.

Since then, my Mastodon timeline is as lively as the one on twitter used to be. While it's numerically fewer than 10% of the contacts on the bird site, I guess that many of the accounts still listed as followers and/or followees over there are no longer active.

One thing still missing for Mastodon is Toot buttons on the websites where I find content to share. For instance on EurekAlert, the easiest way to generate a toot is to use the tweet button and then copy/paste the tweet (before hitting tweet, as twitter may abbreviate the links in ways that don't survive copy/pasting from the published version. I'm also continuing my calendar-year based twitter threads for features published, features transferring to open archives, and books read/reviewed until the end of the year and will relaunch them on Mastodon in the new year. The Every Picture series has already got its Mastodon thread which is now up to date. 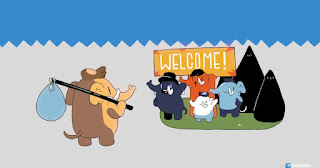 Mastodon's official welcome pic, which I usually see before I log in.

so do find me there:

I'm planning to stick with my general approach of using the short message sites to funnel attention to longer formats such as blog entries, which again guide the interested reader onwards to seriously long formats such as features and books.

PS to do justice to the title of this entry, I will compile here a few resources on the continuing implosion of the bird site, as I find them.