Can't believe it's four years since my feature about how the human sense of smell is underappreciated in modern society, which was mainly based on Asifa Majid's work on hunter-gatherer groups in South Asia who are much better at defining smells in words than we are. So when a major paper came out doubling the number of assignments of olfactory receptors to specific odours, I was glad for the opportunity to revisit the human sense of smell and check up how Asifa's work is progressing.

The new "smelly" feature is out now: 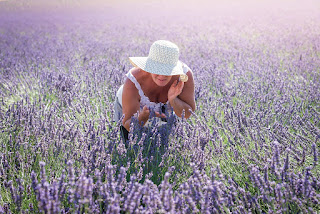 The smell of lavender is recognised as pleasant and soothing. Perception of
the relevant compound linalool is variable between individuals, however. (Photo: © Tiomax80/
Flickr (CC BY 2.0).)