Today's selection of science news. Links are normally to press releases on EurekAlert (at the bottom end I may also add a couple of newspaper stories). I include quotes from the summary (using quotation marks) in cases where the title alone doesn't reveal what the story is about. My own thoughts appear without quotation marks, if I have any.

'Oumuamua is not an alien spacecraft
Phew. That's a relief. Or a disappointment. But maybe it's just very cleverly camouflaged?

Evolution of life in the ocean changed 170 million years ago
... when ecology kicked off ...

The chemical language of plants depends on context
"Scientists from the Max Planck Institute for Chemical Ecology in Jena, Germany, studied the ecological function of linalool in Nicotiana attenuata tobacco plants. They found the gene responsible for linalool synthesis and release which vary considerably in plants of the same species. Behavioral assays with tobacco hawkmoths in increasingly complex environments showed that the effects of linalool on the moths are quite variable, depending on the natural environment and the genetic makeup of the plant."
Love the Nicotiana / Manduca sexta ecology, as featured on the cover of my new book, due out in September!

Building up an appetite for a new kind of grub
"Researchers have reviewed current insect farming methods, processing technologies and commercialisation techniques, as well as current perceptions towards edible insects. Their report highlights that insects could be a key ingredient to avoiding a global food crisis but there are significant barriers to overcome before they are part of the mainstream." 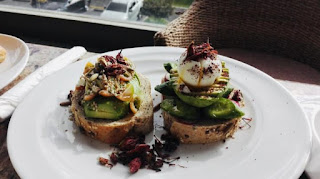 Food preparation using cricket garnish and ground cricket. Photo was taken by Guiomar Melgar-Lalanne and Alan-Javier Hernández-Álvarez during an 'Insect Technological Venue' at the University of Veracruz with the Chef Mario Melgarejo
Credit: Guiomar Melgar-Lalanne and Alan-Javier Hernández-Álvarez, courtesy of Chef Mario Melgarejo

UK MPs more likely to have mental health issues than general public, survey shows
not surprising, but the trouble is that the delusional ones then run for leadership roles ...

from the news media

the arctic fox that walked from Norway to Canada