Today's selection of science news. Links are normally to press releases on EurekAlert (at the bottom end I may also add a couple of newspaper stories). I include quotes from the summary (using quotation marks) in cases where the title alone doesn't reveal what the story is about. My own thoughts appear without quotation marks, if I have any

Goats can distinguish emotions from the calls of other goats

Smells like love...to sea lampreys
"Some people are drawn to cologne; others are attracted to perfume. When it comes to sea lampreys, however, spermine smells like love. In new research led by Michigan State University and published in the current issue of PLoS Biology, spermine, an odorous compound found in male semen, proved to be a powerful aphrodisiac." 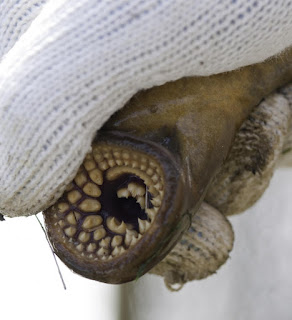 
Elbows key for walkers' efficiency
"Why do walkers hold their arms straight and runners bend the arm at the elbow? A team of scientists at Harvard University campus have discovered that walking with a straight arm is much more efficient than holding it bent, but the jury is still out why runners bend their arms."
why don't they just put their arms behind their backs, they're more aerodynamic that way? I'd suspect it's to do with our evolutionary ancestors running on four legs, may have been kept to signal readiness for fight?