Crikey, looking up my entry on JS Bach's partita I realise that I spent half a year trying to get my head round his son's response, CPE Bach's sonata for solo flute, also in A minor. Slightly less catchy than the father's opus, the son's work is weird in a whole new range of ways, sometimes so modern that the time gap could be 300 years rather than 30. I really like this recording by Georgia Browne, on a baroque flute.

Not sure if any musical psychoanalyst has worked out what this piece tells us about CPE's relationship to his dad, but it surely would be an interesting exercise in understanding humans through the music they produce.

In any case, I had great fun with the first two movements and maybe didn't appreciate the third quite as much, so now decided to move back to the father's work.

Here's my still life with an edition of solo pieces which contains both the CPE sonata and the partita as well as lots of other solo works useful for those who don't have a tame pianist at hand ... 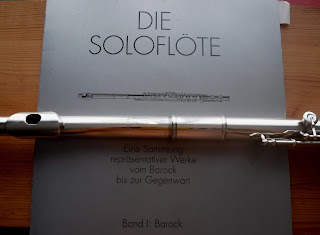