keeping up with the germans

Keeping Up With the Germans: A History of Anglo-German Encounters


Philip Oltermann regularly writes for the Guardian explaining all things German to a UK audience, and also for German media explaining British things, so I’ve come across his writing quite often in recent years and was curious what this book about German-English encounters would be like, which I discovered by accident at an Oxfam shop.

It is structured as a series of eight anglo-German encounters, some of which happened, while others might have or didn’t actually happen. These are structured vaguely chronologically, beginning with Heinrich Heine visit to London in 1827, and ending with Astrid Proll’s visit in 1978. Along the way we also learn how the author was transplanted from Hamburg to London as a teenager (he’s now back on German soil, as the Guardian’s bureau chief in Berlin). In the epilogue he also slips in a Nazi-era encounter, although in the main chapters he deliberately skipped the time that for most would be the first association with Germany, on the grounds that far too many books have already been published about those.

If you ever wondered why an obscure 1950s comedy sketch starring Freddie Frinton is shown on multiple German TV channels every New Year’s Eve, there’s a whole chapter about that, and I thought the author’s description of two TV executives from Hamburg stumbling through a rainy Blackpool night and making that crucial discovery was actually funnier than the sketch itself.

I may have skipped a page or two when the author described football matches in too much detail, but other than that it was a fascinating read and very helpful in filling one or two gaps in my own experience of the very same culture clash - I arrived in the UK three years before he did, so we basically experienced the same period of Anglo-German history in real time. 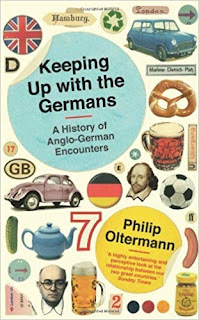 The book is also available in a German edition with the title:
Dichter und Denker, Spinner und Banker


Update 30.9.2019: Here's Oltermann discussing a new exhibition on Anglo-German relations at Bonn.
Posted by Michael at 10:10 AM