Slightly belated echo to this year's Nobel prize in chemistry for Jennifer Doudna and Emmanuelle Charpentier. When the prize was announced, I checked and found that I had already recycled my most recent feature on crispr (applications in agriculture, here), but I didn't think of the previous one, from the early days after the discovery of Crispr, and the nascent discussions on implications for bioethics.

In all of this, I had the advantage that I already knew Jennifer Doudna was brilliant. Nobel laureate Tom Cech told us so back in 1994(ish), when he gave a seminar at Oxford and implored us to remember his postdoc's name because she will go on and do great things. I've often remembered his words and reflected on his remarkable foresight.

Anyhow, my 2015 feature on Crispr, complete with a lovely photo of this year's laureates, is here: 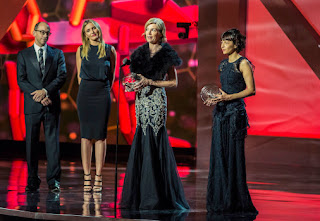 Jennifer Doudna and Emmanuelle Charpentier identified the nuclease Cas9 as a key part of the bacterial immune response to phages and adapted it for use as a universally applicable genome editing tool. (Photo: Justin Bishop/Breakthrough Prize http://www.breakthroughprize.org.)