Rice has many fathers but only two mothers
University of Queensland scientists studied more than 3000 rice genotypes and found diversity was inherited through two maternal genomes identified in all rice varieties. 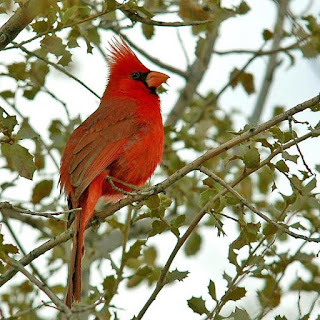 The northern cardinal has a relatively low frequency song and delayed breeding in response to noise pollution.
Credit: David Keeling

Largest set of mammalian genomes reveals species at risk of extinction
An international team of researchers with the Zoonomia Project has released the whole genomes of more than 80 percent of all mammalian families, spanning almost 110 million years of evolution. The dataset, published in Nature, includes genomes from more than 120 species that were not previously sequenced, capturing mammalian diversity at an unprecedented scale. Zoonomia data have already helped researchers in another recent study to assess the risk of infection with SARS-CoV-2 across many species.

The mental state of flow might protect against harmful effects of quarantine < >
In which "flow" refers to being so absorbed in an activity that you froget about your surroundings.

Robotic AI learns to be spontaneous
Now I'm worried - if only about the endless philosophical discussions about the free will and independent mind of robots and people.