First published in 2000 and hugely successful, this is a short novel about two teenage boys caught up in Mao’s Cultural Revolution and sent to the remote countryside for re-education by the hardworking villagers. Instead, they find intellectual solace in an illicit stash of French novels by Balzac, Dumas, Flaubert et al. and also use them to re-educate themselves as well as the little seamstress of the title. Lives are changed, although perhaps not quite in the way they may have hoped. 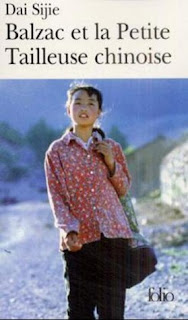 (Cover of the 2001 folio edition I have, too. Later editions typically have images from the film.)

I managed to miss this when it came out and was swiftly made into a movie as well, I only vaguely remember seeing the title some time and wondering what it was about. Catching up with it now, I enjoyed the novel and I was amazed at how well it connected with my own experience of growing up around the same time. I was also stuck in the sticks, maybe not as remote and spectacular as the phoenix of the sky mountain villages with their dangerous paths, but still, as a vastly exaggerated fairytale metaphor for my youth, the novel works surprisingly well. And I found solace in the very same 19th century French novels. Today, I wouldn’t find time for Balzac, but I might revisit Flaubert one day.

It does make me think. Maybe there was a bit of Cultural Revolution going on in Europe as well? Between 1900 and 1960, everybody from whom I inherited DNA lived in towns and cities (eg Heinrich the cellist did all his life). Then, in the 1960s, People got cars, moved to the sticks, commuted to work. A slippery slope. I still get an allergic reaction when, ahead of the TV news, I see trailers for shows pretending that moving to the countryside is a good thing. The Cultural Revolution caused between 200,000 and 20 million deaths, depending on who you choose to believe, and traumatised millions like the author, Dai Sijie. We should heed that warning.