chronicle of a disaster foretold

I need a bit of clarity about the disaster unfolding here and when and why and who knew what.

For me personally it is easy to reconstruct - I was in Germany from 5.-14.3., where case numbers were three days ahead of the UK, and where media pay a lot more attention to what happens in other EU countries such as Italy, so I had a bit of a headstart in awareness. Around March 13th, when I heard the govt. advisors mentioning herd immunity, I did the back-of-the-envelope calculation. 66 million people x 60% infection rate needed for herd immunity x 1% mortality = 396,000 people dead unavoidably. Plus avoidable deaths of those who don't get access to a ventilator when they need one. Might be as many again, so could be anything up to 800,000.

It was a complete horror show to watch how it took the government another 10 days to realise that a six-figure number of casualties would look bad on all of their CVs, until they made a screeching U-turn. In these 10 days, infections went up by a factor of 10, and the deaths went up from 30 to 330. Based on China, I calculated that after lockdown, deaths still rise by two orders of magnitude (30 to 3000 in China's case). So my expectation for the UK is 33,000. We're well on track to reach this figure. Changing course 10 days earlier would have saved 90% of these, i.e. 30,000.

So, considering that it took me nothing more than two simple multiplications to realise the govt was driving us over a cliff, I am really curious about who knew what and what they are going to say in their defence when they end up in court for killing 30,000 people by gross negligence. Based on my own notes from the events of the past weeks, and on today's comprehensive reports in the Sunday Times (paywalled but there are copies floating around on social media) and in the Observer, I've drawn up a simple timeline of how we got into this mess.

31.12.2019 China alerts WHO that several cases of an unusual pneumonia had been recorded in Wuhan.

3.2. Johnson speech at Greenwich: “There’s a risk that new diseases such as coronavirus will trigger a panic and a desire for market segregation that go beyond what is medically rational to the point of doing real and unnecessary economic damage.”
”Humanity needs some government somewhere that is willing at least to make the case powerfully for freedom of exchange, some country ready to take off its Clark Kent spectacles and leap into the phone booth and emerge with its cloak flowing as the supercharged champion of the right of the populations of the Earth to buy and sell freely among each other.”


7.2. Chinese doctor reprimanded for his early warnings dies of the disease. His death is also reported in the UK.

25.2. Johnson returns to London for fundraising event, the Winter Party.

26.2. John Edmunds and colleagues present a scenario to govt. advisors that predicts 380,000 deaths and need for 220,000 intensive care beds. Their report emphasised the urgent need for a lockdown.

1.3. Meeting of Sage, Dept. Health and NHS sees evidence from Italy suggesting 8% of people infected will need hospital treatment (up from 4-5%), raising concern re NHS ability to cope.

2.3. First Cobra meeting on coronavirus attended by Johnson, after he missed the previous five. Battle plan drawn up including plans to establish Nightingale field hospitals.

3.3. Johnson says he still shakes hands with everybody, including Covid-19 patients.

12.3. Johnson at press conference: “More families, many more families, are going to lose loved ones before their time.”

1.4. According to Doris Ann Williams, ceo of British In Vitro Diagnostics Association cited in the Sunday Times, this was the date her organisation was first approached by the govt. to help scale-up of testing.
The British Healthcare Trades Association (BHTA) was ready to help supply PPE in February — and throughout March — but it was only on April 1 that its offer of help was accepted. 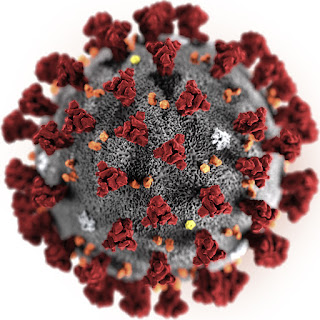 This illustration shows the ultrastructural morphology of the novel coronavirus responsible for the 2019–2020 pandemic of the COVID-19 coronavirus disease. (Photo: Alissa Eckert, MS, Dan Higgins, MAM.)

PS after writing this it occurred to me that March 21st was the 100th day after the election. Is this the worst 100-day record of any government ever?

Polly Toynbee's analysis on the situation after the Sunday Times report.


UPDATE 5.5.2020:
The Guardian has published an extensive report with a timeline on 30.4. From this I learned that the Chief Medical Officer, Chris Whitty, said on March 3rd (at the press conference where Johnson said he was shaking hands with everybody) that in a worst case scenario 80% of the population could become infected and 1 % might die. Nobody seems to have done the multiplication which would have shown a result of 528,000 deaths (still not including those to the health system collapsing under the overload).

Also from the Guardian report, a couple of quotes from Patrick Vallance, 13.3.: “Our aim is to try and reduce the peak, broaden the peak, not suppress it completely,” Vallance explained on BBC Radio 4’s Today programme: “Also, because the vast majority of people get a mild illness, to build up some kind of herd immunity, so more people are immune to this disease, and we reduce the transmission. At the same time, we protect those who are most vulnerable to it. Those are the key things we need to do.”

Asked on Sky News what proportion of the population would need to become infected to achieve herd immunity, Vallance replied: “Probably about 60% or so.”
Posted by Michael at 4:52 PM