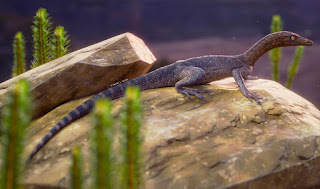 Hidden army: How starfish could build up numbers to attack coral reefs

How does habitat fragmentation affect Amazonian birds?
The Biological Dynamics of Forest Fragments Project (BDFFP), located near Manaus, Brazil, began in 1979 and is the world's longest-running experimental study of tropical forest fragments. A new paper in The Condor: Ornithological Applications summarizes four decades of data from the project about how Amazonian bird communities respond to habitat fragmentation, a question as relevant today as ever in light of the recent increase in deforestation in the Amazon.
See also my 2017 feature about forest fragmentation, also covering the work of this project.

House cleaning on the nanoscale

Harnessing the power of electricity-producing bacteria for programmable 'biohybrids'

Loss of smell in patient with COVID-19

Potential harms of chloroquine, hydroxychloroquine and azithromycin for treating COVID-19

Babies in popular low-riding pushchairs are exposed to alarming levels of toxic air pollutants
Quite shocking that we don't appear to know where all those pollutants come from. In the entire press release I couldn't find a single mention of a possible source. The pollutants are just there in the street, must be a natural thing ...


Revolutionary new method for dating pottery sheds new light on prehistoric past
Not about dating sheds, sadly. I would suggest to the PR team to re-read the headline after writing. Maybe a day after writing it.

Bristol leads archaeologists on 5,000-year-old egg hunt
An international team of specialists, led by the University of Bristol, is closer to cracking a 5,000-year-old mystery surrounding the ancient trade and production of decorated ostrich eggs. Long before Fabergé, ornate ostrich eggs were highly prized by the elites of Mediterranean civilizations during the Bronze and Iron Ages, but to date little has been known about the complex supply chain behind these luxury goods.


Promising advance in depression research
Despite their effectiveness, only 40% of patients respond to the first antidepressant they try. A recent paper in Nature Communication strongly suggests that a particular protein, GPR56, is involved in the biology of depression and the effect of antidepressants. The McGill led research team believe that this protein could offer a novel target for new antidepressant drugs.


Is this the moment we give up flying? asks Nicole Badstuber in the Guardian. (I basically gave up in 2010.)

Lancet editor Richard Horton on how the UK govt got the response so catastrophically wrong. He's always worth reading. (My somewhat shorter interpretation is "criminal carelessness".)