Every picture tells a story No. 22

Hedwig the milk maid worked on various farms until she got to the one owned by Hedwig Scholz and Paul Gellrich at Olbersdorf (Kreis Reichenbach, Silesia), and ended up marrying their son, Paul Gellrich junior. When her husband was drafted to serve in WW2, he insisted she and her baby move in with his parents (rather than with hers at Dörndorf). She did so quite reluctantly, as she didn't get on very well with her mother in law, who allegedly made everybody feel that it was her farm and everybody else was just tolerated by her good grace. As Hedwig Scholz died in 1945 and her son didn't come back from the war, there was nobody to defend her views, so I may be reporting a single-sided, biased view here.

The only information we have about her siblings comes from an inheritance fought over in court, which kind of fits with the reputation.

As the surviving relatives didn't like her much, there aren't many photos of her, but here she is (right) surveying her fields with an unidentified woman: And another one which has suffered some sort of unintended darkening: 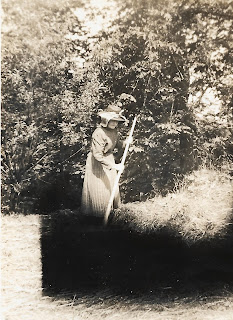 The name Scholz, by the way, which she shares with Germany's new chancellor Olaf Scholz, is the Silesian variant of the village mayor, elsewhere known as Schultheiß or Schul(t)z(e). Like Schulz and all other variations, it's far too common to be useful, but at least it points firmly to a Silesian origin.