When the three children from the bakery in Dörndorf (Silesia) grew up, Hedwig the milk maid didn't think much of her sister Emma, who allegedly had the habit of sneering at Hedwig's "smelly" employments in agriculture. She was very fond of her brother Wilhelm though. He went missing in the last months of the war and Hedwig, then transplanted to west Germany kept looking for him for many years. He never did turn up, and we still don't know what happened to him.

So what we know:

As she missed him so much, Hedwig kept lots of photos of him, and he tends to look cute and friendly in these. Here's a selection with a few open questions: 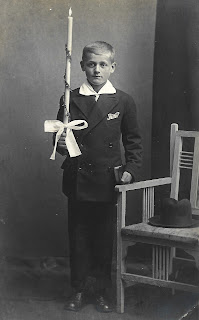 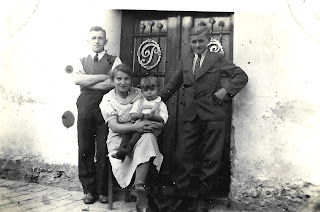 Wilhelm on the right, no idea who the others are. Maybe he lodged with them during his apprenticeship? 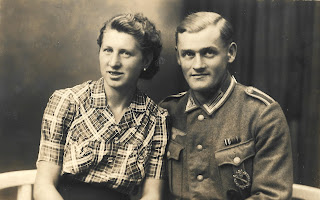 We don't know who his girlfriend was either. 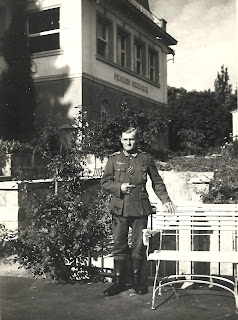 and finally, if anybody recognises this Pension Roseneck, I have no idea where this might be. None of the eponymous guest houses I can find online has anything like the characteristic architectural details around the windows seen here. Photo dates from 1942. Update: It is marked on the back with greetings from Badenweiler, which may be a clue. Badenweiler is a spa town in the Black Forest, but I still can't find Pension Roseneck there.