It's also the season for board games, so here is Frieda the pianist as a budding granny playing a game with her first three grandchildren and their parents. I think I've seen this game before but can't remember what it's called or how it works. 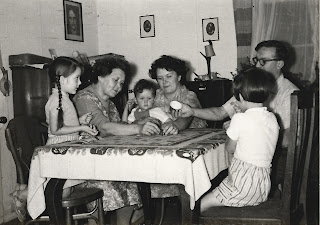 What interests me more about this photo is the surrounding, with Frieda's piano in the background on the left and her middle daughter's violin on the top of it - although that middle daughter had already married and moved to a different country by that time. It boggles my mind that nobody alive has any memories of this instrument, even though it was always there for all to see. Also on the piano a portrait which I think is of Frieda's father, Heinrich the station master of Minden Stadt. Above the piano on the wall that could be a portrait of a composer (Schumann?).

Around the corner on the wall to the right of the piano, two family portraits. I've identified the one on the left here, and the other one is a portrait of her with Peter the customs officer, possibly taken on the occasion of their engagement. We still have both of these, still in their frames, but I don't have them here, will have to do a separate entry with the entire collection of photos seen around Frieda's flat. Heck, I may even be able to re-unite them with these tasteful antler-lamps. Watch this space.

PS come to think of it, I did a re-enactment of the violin lying on the piano, when both crossed paths again in Düsseldorf this June: 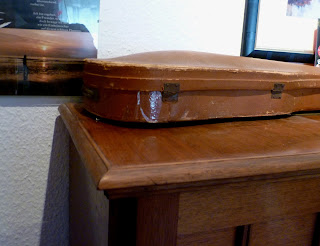 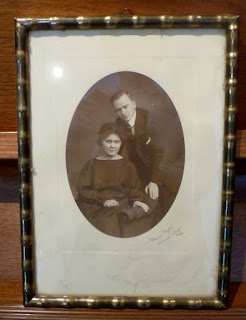