After Julius the shopkeeper and later textile businessman had to leave Königsberg he settled in Bad Nauheim and tried to start a new textile business from there based on his address book if not much else. From November 1945 he and Helene (and whatever other family members washed up) lived in a single room in Frankfurter Str. 12, an art nouveau villa which the family later bought, and which you can see here.

Julius died in 1950, aged only 66, which was possibly related to the tropical disease he caught as a young man in Africa. Julius had bullied his younger daughter Esther into studying economics against her wishes. She therefore sported the title of a Diplomkaufmann, which together with her last name of Düsselmann made for a lot of manliness on this woman's business card. Working with Otto Hummel first at Königsberg and then at Reichsuniversität Posen (Poznan), she had even prepared a doctoral thesis about the eastern European trade which became pointless after the war, had worked at Frankfurt with Ludwig Erhard between 1945 and 1950, and then after Julius' death felt obliged to keep his business alive. This involved her driving around as her own travelling saleswoman, for which purpose she got a car, namely a Fiat produced in Germany by NSU, so it was known as an NSU-Fiat. At this point, nobody else in the family had a car (people were still civilised and lived in cities and didn't need one!), so it made a big impression on her teenage nephew, and there are a few photos of her with the NSU-Fiat: 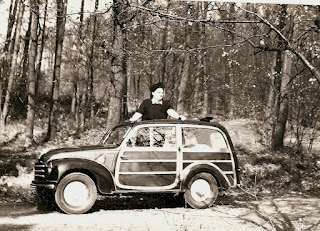 I love this one which kind of reflects her imposing nature. 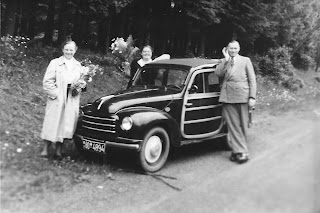 I have no idea who her fellow travellers may have been. 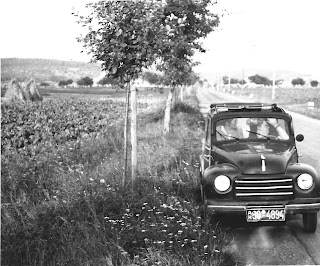 Could be her sister Ruth in the passenger seat not sure.

The closest match for the car I could find online is this:

I gather it could be a Fiat topolino 500C Belvedere, but have no strong opinion on this.

Esther's saleswoman life continued until 1960. Then, as compensation payments for the lost factory in Königsberg enabled the family to buy the house, she gave up the textile business and ran a bed and breakfast for spa visitors.