Writing the entries about the family of baker Adam Eberle in Lorsch in the first series, I thought that I didn't have a photo with all four children. Well I was mistaken, I do have at least a photo of a family portrait (not sure where the original is): 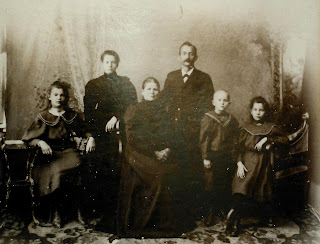 Their mother is Anna Barbara Schütz, born 1860 in Nieder-Liebersbach. She was Adam's first cousin, his mother was her father's sister. So they only have three pairs of grandparents between them. All three families (Schütz, Schmidt, Eberle; further back: Treusch, Röder, Quick, Bangert, Kadel etc.) have been settled in the Odenwald region since the late 17th century, at which time inward migration from Switzerland, Thuringia, and elsewhere helped to revive the Odenwald villages depopulated by the 30-Years War (for details, see the update under this entry in the first series).

For easier comparison, I'll throw in the earlier photo with their house, which I shared before: 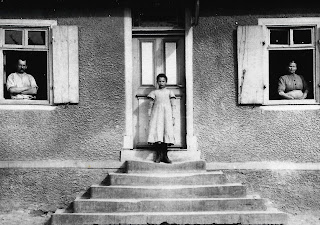