I hear it's party season out there (although I'm more in hibernation mode myself), so let's have some party pics. Richard the young chemist managed to survive WW2 guarding some telegraph station near the arctic circle without getting promoted or noted in any form, which is why after the war he got very swiftly got back into teaching and soon became headteacher of the Göttenbach-Gymnasium in Idar-Oberstein (a Gymnasium is a selective secondary school, a bit like grammar schools in the UK). He started there as acting headteacher in 1950, and was promoted to the proper rank of Oberstudiendirektor in 1952.

There are obviously all kinds of photos of him at work and with the teaching staff, but let's have some party pics which I found floating around randomly, so I have no clue what year they were taken, what the party was about, and who the other people were. All hints welcome. 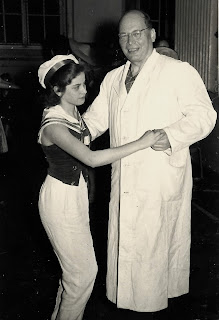 and another one, I think I found both in the same box of random stuff: 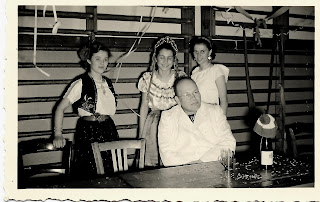 NB his other subjects were maths and physics, I just kept the chemist of the season 1 episode because he's wearing a lab coat in these photos.