Every picture tells a story No. 30

The series has so far been only about the generation of our grandparents and earlier ones, mostly because that's the visual memory at risk of extinction, as the people who know the stories behind the pictures are dying out and old photos are at risk of ending up in landfill or, stripped of their meaning, on fleamarkets.

Here, however, the generation of our parents makes an appearance, partying in the flat of Frieda the pianist (her piano is seen in the first two pictures on the right hand side), so apart from the young people's fashions and party games of the 1950s, these pictures also tell us something about how Frieda lived in the last decade of her life, although she doesn't appear: 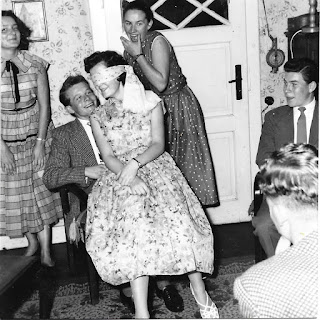 I first found these photos as strays with no explanation, later also in an album dated to 15.9.1956. Which is nowhere near any relevant birthday, so I have no idea what the occasion was. It also means that both of Frieda's older daughters were already married (and off to France), leaving 17-year old Sigrid the run of the flat. 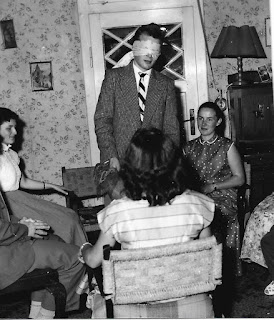 I'm wondering if that's a fiddle case on the piano, behind the lamp. Leaning to it are two photos, the one on the right shows Sigrid as a toddler with her father who died in 1945 (I don't recognise the other photo). On the wall above the piano, a family portrait framed in the same style as the two we have seen in the piano-playing picture, No. 7. Another photo I'm not showing here because it isn't as good as the others reveals that the conspicuous door next to the piano doesn't lead to another room, but into a mostly empty cupboard.

Moving over to the food and drink side of things (the only item I recognise is the antler-framed barometer on the wall): 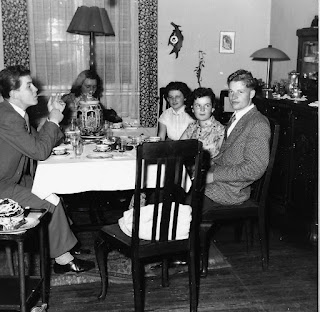 And a last one: 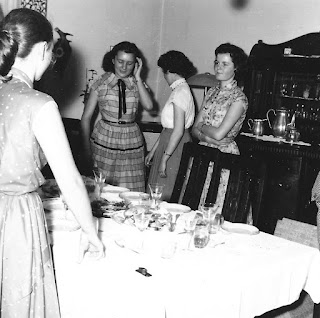