the case of the mysterious uncle

Every picture tells a story No. 31

Adam Eberle, the baker at Lorsch, had eight brothers and sisters, according to his oldest granddaugher, but the details she could provide about some of them are very sketchy and difficult to align with the 5 brothers listed in GedBas.

Essentially both sources only provide specific info about boys, there may have been up to three sisters about whom we know nothing. One brother inherited the farm at Obermumbach (Michael, I assume), Nikolaus found moderate wealth as a merchant in Austria, but died suddenly at 32, Johannes became a butcher and married, and then there is the mysterious uncle from Mainz, who went to university and became a Vermessungsrat (an official in land survey matters, on a level comparable to a high school teacher, Studienrat). We have a beautiful portrait of him but don't know his name: 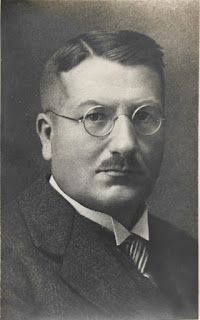 As the siblings listed in GedBas include one called Peter, like Adam's only son (our customs officer), I am wondering if this was him, and he wasn't referred to by his name as this would have led to confusion. This Peter was born January 1866, so he was just two years and a bit younger than Adam.

Anyhow, the nameless uncle had two daughters, one of whom may have been called Amalie. One of them is thought to have died together with her children in a bomb attack in WW2. And we don't know about the other, so there may or may not be living descendants of the uncle from Mainz, whose name may or may not have been Peter Eberle. Or indeed Friedrich Adam Eberle. Or anything else Eberle if he's one of the three unnamed siblings.

Stop press: It just dawned on me that this photo from a photography studio in Mainz probably shows his daughters. (The letter explaining the details mentioned above came with a photo, and this is probably it, especially as we don't know anybody else in Mainz.) 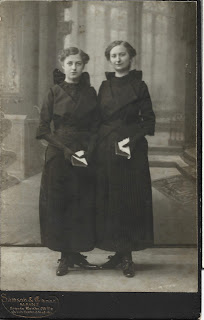