Every picture tells a story No. 29

Around 1930, Heinrich the cellist was put in charge of the city's Pfandleihhaus (a pawn shop, but run by the city administration) at Elberfeld, which around that time became part of Wuppertal. This episode ended swiftly after he launched an investigation into things gone missing - very mysterious as he and his wife Maria were living above the shop, their German shepherd called Schluck* guarded the property, and there was no sign of forced entry. It turned out that it was Maria who had helped herself to items. She got a psychiatric assessment and Heinrich was moved to a different department of the city administration. And they had to find a new flat (in Gronaustraße, shown here).

Here are Maria and Schluck from the set of Richard's negatives I processed in the 1980s. 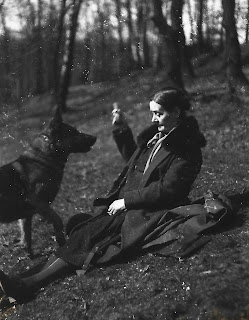 Possibly from the same woodland walk, one of Richard with the dog. 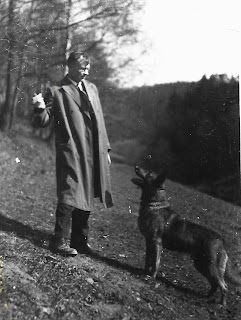 * Note on the name: in comicbook language, schluck! would translate as gulp!, but that only emerged several decades later (the translator Erika Fuchs is widely credited for this addition to the German language). So at the time of these photos, the association of Schluck was a small quantity of drink (as much as you can swallow in one gulp), so similar to a sip but maybe a bit more generous.