Every picture tells a story No. 28

Here is a postcard of the Taubstummenanstalt (school for the deaf-mute) Wriezen, which was sent to our station master at Adamsweiler by some of his daughters and their cousin Hedwig Kauer on October 19, 1901: 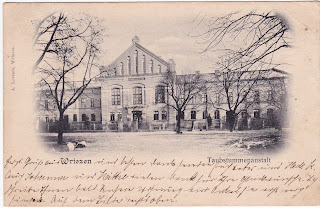 The card reads (with a little help from my relatives):

The story is, one of the station master's brothers, Friedrich Kauer, born 1849 in Simmern, desperately wanted to be a teacher but was also desperately amusical. As a 19th century teacher was expected to sing with the class, his affliction barred him from the profession. So he got interested in teaching the deaf, which was a new concern that the kingdom of Prussia and then the German Empire recognised. He arrived at the right time, because the Empire built specific schools for the deaf, including the Wilhelm-Augusta-Stift at Wriezen in 1879-81, of which our Friedrich became the headteacher. He may have been there from its foundation, I have been unable to find details of that, and the town administration of Wriezen, which now occupies this very building, didn't reply to my questions. It is a listed monument, but no detailed history there either.

Sadly I don't have any picture of Friedrich at work or even at his school, this studio portrait is the only photo we have of him: 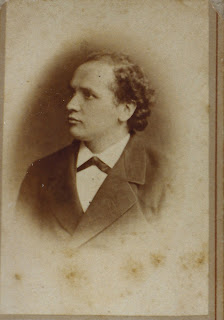 He married Auguste Kaufmann from Marienburg a. d. Nogat: 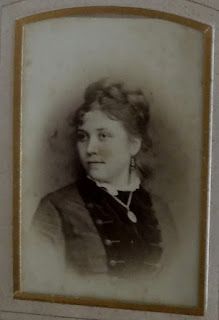 and they had one daughter, Hedwig (who co-signed the card above). She married a medical doctor from Wriezen called Morgenstern, they also had one daughter. We believe he was Jewish, and unfortunately we don't know what happened to this family in the Holocaust, or if there are any descendants that made it through. The well-preserved Jewish cemetary in Wriezen does not have a record of anybody called Morgenstern or similar. All hints appreciated. (NB Friedrich and the station master Christoph Gottlieb had a Jewish-born great-grandfather, just remote enough so Christoph Gottlieb's five daughters and their children could conveniently forget about him in the Nazi era.)

Poor old Friedrich served as a scapegoat for generations of Kauer descendants claiming they were amusical. While I believe his affliction (seeing that he was highly motivated to teach, he would have found a way to learn music if he had the physical ability), most other cases are dubious. A physical inability to process musical sounds is much rarer than people think. Basically, if you can distinguish music from noise - which is a non-trivial task and requires a lot of hard work from your brain - you are able to learn to make music. Which is an important point I'm making with my musical memoir.